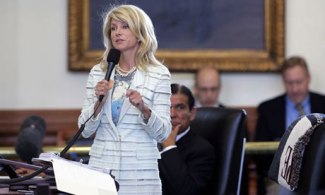 On June 25, 2013 Texas State Senator Wendy Davis    embarked on an eleven-hour filibuster to block a bill that  would drastically limit women’s access to abortion and  health care services in Texas. Famously wearing pink  Mizuno sneakers, Davis’s efforts were bolstered by the  hundreds of women and men who descended on the state  capital building that day. In fact, it was these women and  men, not Davis, that prevented the vote that day as the  roll  call vote was disrupted as the result of the crowd’s vociferous response to the silencing of another woman on the floor, Senator Leticia Van De Putte. As Davis put it to the crowd, “Today democracy was in action…You all were the voices we were speaking for from the floor.” This moment–what has come to be known as “the people’s filibuster”–is poignant example of contemporary gender activism and political participation. Although one may point to June 25, 2013 as evidence of a thriving US democratic system with an active citizenry, one would be remiss to not consider the ways this moment of the “people’s” democratic participation was haunted by the contested concept of citizenship itself.

Tambor explains, “Citizenship has many important social and political meanings: it gives  status of equal  membership in a state or nation; it  determines the privileges and  obligations of membership;  it offers shared identity in diverse societies; and it sustains  political freedom and self-government by providing a set  of civic virtues and practices. But it also helps regulate the  borders between men and women, insiders and outsiders,  legitimate workers and illegal labor, and autonomous and dependent members of communities and families.” The concept of “citizenship,” in other words, raises questions of individual and collective political identity, inclusion and exclusion, regulation and discipline, community and nation, activism and engagement, and responsibilities and rights. The 2016 Gender and Citizenship conference takes up these themes and brings together scholars from rhetoric and political science to consider performances and articulations of gender, sex, sexuality, nation, race/ethnicity, and citizenship across U.S. and global history. Plenary presentations will consider a number of topics, emphasizing different forms of enactment of citizenship by elected officials, community members, and social movements to draw attention to issues particularly relevant to a gendered understanding of citizenship and to considering the larger political systems in which gender and citizenship take shape.